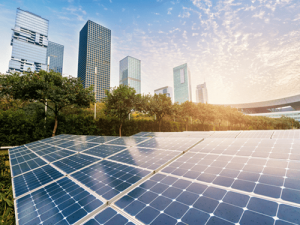 Originally planned by the Sierra Club, Ready For 100 (RF100) is a network of local leaders committed to achieving 100% renewable energy by 2050. Six U.S. cities have already met their targets of generating all of the energy used community-wide from clean, non-polluting and renewable sources.[2]

ecoPreserve is proud to be headquartered in one of the most sustainable cities in the Southeast! Orlando is not only an RF100 city but also has committed to reducing its air pollution and greenhouse gas emissions 90% by 2040.

The Orlando, Florida City Council adopted the RF100 goal by unanimous vote in August 2017. As that commitment was made, Orlando Mayor Buddy Dyer noted that more than 50% of the world’s population lives in cities, so city mayors must lead the fight against rising seas and increasing temperatures.[3]

Helping organizations improve operations, reduce costs and achieve sustainability through data driven, efficiency focused, planning, reporting & certification.
The Global 100 Most Sustainable Corporations for 2020 list is based on up to 21 key performance measures that asses… https://t.co/EH4LrHKs5r - 3 days ago