Orlando celebrates Earth Day many ways, on many days

A national day to focus on the environment was first proposed in 1970. Setting aside party differences, two U.S. Senators collaborated to support a “national teach-in on the environment”. An initial staff of 85 promoted events nationwide.

To encourage youth participation, a date falling between Spring Break and Final Exams was chosen. That was April 22, 1970. More than 20 million Americans participated that day. Many gathered at rallies and marched in demonstrations. Others attended civic meetings to advocate for environmental awareness and action.

Now, Earth Day is the largest secular observance in the world. More than a billion people attend events that promote awareness and advocate for changes in public policy.[1]

A month of events in Orlando

Winter Springs held observances on the first Saturday of April, followed the next week by Winter Park. 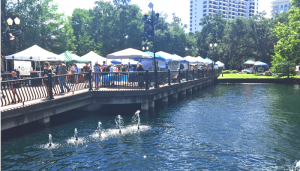 The Central Florida Earth Day event drew residents from Orlando and neighboring communities at Lake Eola on Saturday, April 20th. Greenworks Orlando[3] and IDEAS for Us[4] presented panel discussions. Other presentations focused on vegan food preparation. An area was set aside as a Kids’ Zone, and fourteen free acoustic and hybrid music performances were offered.[5]

One of the larger and certainly best-attended celebrations happened on Earth Day itself, April 22nd, Travelers and local attendees at Orlando International Airport (MCO) viewed information about sustainability efforts around Central Florida and at the airport. ecoPreserve exhibited there, as did the City of Orlando Green Works, Orange County Solid Waste Division, Orlando Utilities Commission, and more than two dozen other vendors.[6] 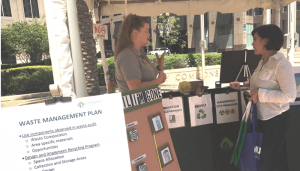 Other events occurred later in the month. A lunchtime sustainability fair, Earth Day Work Day, was held on Wednesday, April 24th at Orlando City Hall Plaza. Music, games, and exhibits were there to inspire “how to be green at work and home.”[7]

The Central Florida Zoo celebrated Earth Day, Endangered Species Day (May 17th), and World Oceans Day into a Party for the Planet on Saturday, April 7th. Throughout April, accredited members of the Association of Zoos and Aquariums (AZA) held similar celebrations nationwide.[8]

Many of the above events are certain to be offered again next year. April 22nd, 2020 will be the 50th anniversary of Earth Day. More venues than ever are likely to participate.

News and Notes items accompany the longer articles found in ecoPreserve’s newsletter, Sharing Sustainability. Several issues of the newsletter can be previewed here.

Helping organizations improve operations, reduce costs and achieve sustainability through data driven, efficiency focused, planning, reporting & certification.
The Global 100 Most Sustainable Corporations for 2020 list is based on up to 21 key performance measures that asses… https://t.co/EH4LrHKs5r - 6 days ago